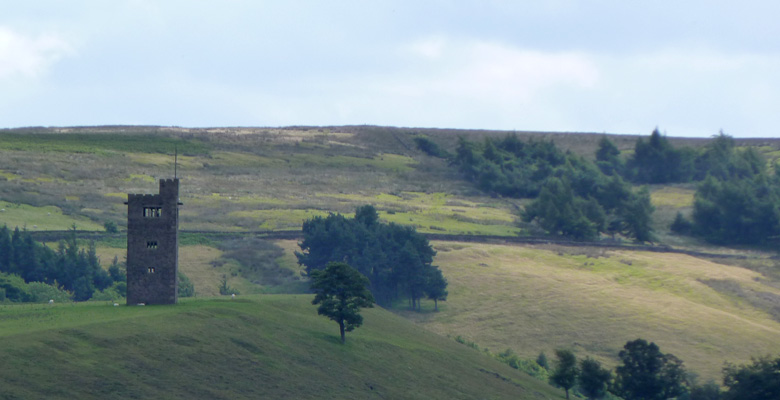 A walk around Dale Dike Reservoir and Ughill Moor.

This walk is sponsored by The Plough, Low Bradfield

A combination of farm lanes around Dale Dike reservoir followed by a climb onto Ughill Moor, with open views across the Peak District National Park. Well defined paths and tracks, even across Ughill Moor. The descent back to the Strines dam is steep and can be boggy in wet weather.

From Mortimer Road (See points of Interest 1) take the farm track down hill. Bootes tower is visible on the hill across the reservoir.

Follow the track down past Broggin Farmhouse (2). At the farm house take the track which forks off to the left. This track goes along the western side of Dale Dike reservoir.

Continue along Hall Lane until you approach the farm buildings. The public footpath forks off to the left

The track emerges onto Dale Road. Continue in the same north-easterly heading along Dale Road. The Road drops down past a few buildings.

About 200m after the houses the road swings round to the right. There is a well marked gateway into the Yorkshire Water Dale Dike Reservoir site. Follow the path as it winds its way down to the stream.

Cross the bridge and follow the path up the steps past the reservoir outfall pipes. The path opens out by the eastern end of the dam wall. This is the new dam which was built in 1875 (4).

Follow this path up until it meets the track which is running parallel to the reservoir. Turn right onto the track.

The track emerges out of the woods onto a field. The footpath goes up steeply to the left. The path is not initially clear. Keep as close as reasonably possible to the wall as the path follows the boundary of the woods and the field. The path becomes clearer nearer the top.

Cross over Blindside Lane, and over the stile, continuing to climb.

Continue to Hoar Stones Road. The path continues on the other side of the road, slightly offset to the right. My OS map shows woodland to the left of the path, but at the time of writing this had been cleared. Continue along the path to Wet Shaw Lane.

Turn right onto Wet Shaw Lane. After about 100m Stake Hill Road heads off on the left across Ughill Moor. This is an old route across the moors.

Follow Stake Hill Road for one and a half miles, passing over Ughill Moor to Moscar. There are excellent views over Strines and Dale Dike from this old road. As the path starts to drop down it swings round to the right and joins another track coming in from the east.

The path follows the field boundary in a straight line all the way to Sugworth Road. Keep the wall to your left hand side. This section can be a bit boggy so the path tends to weave around as walkers have tried to find firmer ground.

On reaching Sugworth Road turn right and follow the road until you reach the entrance to the driveway to Sugworth Hall (5). The footpath enters the drive by means of a stile on the left hand side of the ornamental gates.

Continue down the drive for about 100m. The footpath forks off to the right and goes above the house through a rhododendron tunnel.

The tunnel emerges onto open fields with the tower (6) ahead of you.

The path keeps about 100m to the right of the tower. As you draw level with the tower the path swings right and heads in a north-easterly direction towards the spillway from the reservoir. The path is not clear in the field so you will need to look out for the marker posts. Once on the path, descend steeply down to the Strines dam (7). This part of the path can be very boggy in wet weather and you may need to move away from the path to find a drier route.

At the bottom of the hill follow the path into the field and swing down to the left to the stile in the high wall. Cross the stile and turn left. The path splits as it approaches the stream. Take the left fork and cross over the wooden bridge.

Climb back up the bank towards the farm buildings.

Retrace your steps past the farm, up the lane to Mortimer Road.

The road was constructed in 1777 as a turnpike road by Han Winthrop Mortimer, Lord of the Manor of Bamford. It broadly followed an ancient packhorse route, known as Halifax Gate, which ran between North Derbyshire and the West Riding of Yorkshire. Mortimer wished to link Grindleford with the market town of Penistone to increase trade in wool and agricultural produce. Mortimer road would link at Penistone with the Doncaster – Barnsley – Woodhead – Manchester road, turnpiked in 1740 and the Sheffield – Huddersfield – Halifax road, turnpiked in 1777. At Grindleford it linked with the Sheffield – Ringinglow – Fox House – Buxton road which had been constructed in 1758. Mortimer hoped to make a profit from the tolls charged to users of the road and built a number of tollhouses (or ‘turnpikes’) along the route. However, the road was not profitable and Hans Winthrop Mortimer died bankrupt in 1807. The road passed through no major centres of population to provide passengers for stagecoaches and failed to attract freight traffic as heavy wagons preferred less hilly routes. After 1840, railways also took trade away from roads. Some parts of Mortimer Road were bypassed by new roads, such as the stretch near Ladybower reservoir which was bypassed by the Sheffield – Glossop road constructed in 1822. Stretches of the old road can still be seen between Moscar Head Farm and Ladybower Inn, where it is now a bridle way.

The house standing at the north end of Strines reservoir pre-dates the reservoir and is recorded as being leased by George Woodhead in 1715. At one time it was the reservoir keeper’s house.The word ‘brogging’ means ‘marshy’.

A dwelling on the site was first mentioned in documents as early as 1318 when it was recorded that a piece of land called Hallfelde in Thornsett was conveyed between Adam de Romesker and Adam Hawksworth. In 1439 John Greves owned the house and the family continued to live there for several generations. During the c17th Nicholas Greaves rebuilt Hallfield House in a similar style to Onesacre Hall, 4.5 miles to the east, which was constructed around the same time. In the c19th Hallfield House was owned by the Fitzwilliam Wentworth estate and used as a shooting lodge. It is now a private house and is a Grade 2 listed building.

In 1864, the newly-built dam burst, causing the one of the biggest man-made disasters in British history. The Great Sheffield Flood, as it became known, inflicted massive damage downstream along the rivers Loxley and Don and through the centre of Sheffield and around 250 people lost their lives. The dam was rebuilt in 1875 on a smaller scale. Below the dam is a stone engraved C.L.O.B. (centre line old bank), which marks where the original dam wall would have stood. A flood memorial stone was erected in 1991 by Bradfield Historical Society to commemorate those drowned and a memorial also can be seen in St Nicholas’ Church, High Bradfield.

Originally a c17th building, the hall was considerably extended by Charles Boot in the c20th. Charles was the son of Henry Boot, who founded the well-known Sheffield building company. In the 1930’s the company built the Pinewood Film Studios. The name ‘Sugworth’ derives from the Anglo-Saxon words ‘sugga’ meaning ‘soggy’ and ‘worth’, meaning ‘settlement’.

The tower was built in 1927 by Charles Boot to provide work for his employees during the depression, although it is also said it was to enable him to see his wife’s grave in the churchyard at High Bradfield. Now in a poor state of repair, the tower originally had a wood paneled interior and a staircase. Apparently a cow wandered into the tower and managed to climb up to top. It was eventually rescued, but the lower section of stairs was removed to prevent a repeat occurrence.

Constructed in 1871, this is the smallest of the reservoirs in Bradfield Dale with a capacity of 453 million gallons. The name ‘Strines’ may derive from the Old English words ‘strynds’ or ‘strinds’, meaning a rivulet or stream. There is no public access to the reservoir.