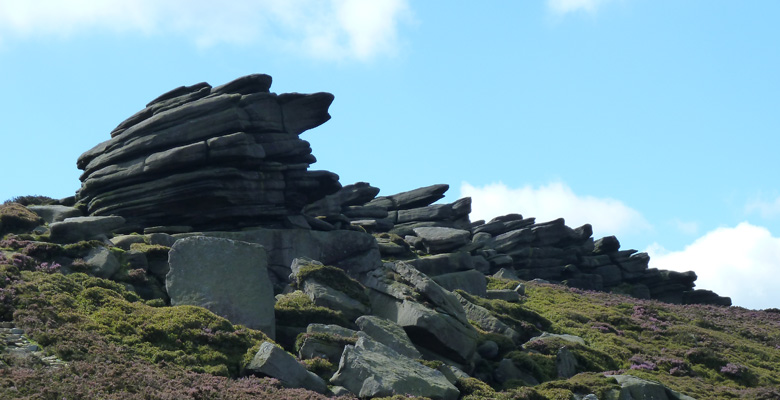 Dukes Road to Back Tor

This walk is sponsored by The Strines Inn.

From Low Bradfield the walk climbs through fields to High Bradfield. The route passes the church and Bailey hill, goes through a wood before it cross more open land. The route follows the old Dukes Road onto the moors to Back Tor. The route then drops down Foulstone Road before returning to Low Bradfield by the side of Dale Dike Reservoir.

Do not cross the bridge. Continue up the left bank of the stream until you reach the narrow wooden bridge. Take care as flagstones are uneven and can be slippery. Cross the bridge and ascend the stone steps.

Continue up the path until you emerge onto Smallfield Lane.

Cross Smallfield Road and go up the steps and through the metal gate on to the footpath opposite.

Continue up the hill in the same direction as before. Follow the path up by the trees, aiming for the church in High Bradfield (See Points of Interest 1).

The path goes across in front of the churchyard on top of the retaining wall, to come out by the main entrance to the church yard (2).

The building on your left by the church yard is a watchtower (3) built to prevent body snatching.

The footpath goes goes up Jane Lane beside the watchtower and then left over a stone stile.

Take the path through the church yard and on into the woods. As the path enters the woods the path splits three ways. The right fork goes up to Bailey Hill (4). The left turn goes down to Agden Reservoir (5). Take the middle path (slightly to the right) which descends slowly into the woods. These woods are due to be harvested in late 2010.

Follow the path as it turns left in the woods.

The path drops down to Rocher End Brook. Go through the gate and go straight on taking the wide track. Do not turn right up the hill.

Follow the track round until you reach the junction.

Go up through the stone gateway ahead on the right.

Go up the slope and head slightly to your right until you join the track.

Follow the track until you reach the stone stile. Cross the stile and then cross the field to the next stile, which is on its own with no fence!

Follow the path along past the ruined farm buildings at Rocher Head.

Continue along the lane, ignoring the path off to the right.

Continue up to the main road (Smallfield Lane). Beware of traffic.

Cross the road taking the footpath opposite.

Cross the field, aiming for the gateway at the far end.

Continue up through the next field. At the stone gateway entrance to the field take the path to the right keeping the wall on your left.

This path emerges onto Mortimer Road (6). Again beware of traffic.

Cross the road and go through the gate to take the track known as the Dukes Road onto the moor.

The path starts out as a well made track, but slowly degenerates into a rough and sometimes boggy path.

As Low Tor and Back Tor get closer the path splits, with the right fork dropping down to Derwent Reservoir.

The split occurs near a couple of cairns.

Keep to the left path. The next section has been paved with slabs and should be visible from the junction. The path is reasonably well defined.

Follow the paved path past Low Tor and up to Back Tor.

Enjoy the views from Back Tor across the Dark Peak, including Win Hill, Lose Hill, Mam Tor, Kinder Scout and Bleaklow.

From Back Tor continue south towards Dove Stones for a short distance until you reach the cross roads of paths, marked by the upright marker stone.

Turn left and go down the path known as Foulstone Road.

Follow this path all the way down to the Mortimer Road.

Turn left and follow Mortimer Road for nearly half a mile.

Follow the lane round to the left and past the farm buildings.

Turn right towards the Strines dam wall (8). Take the footpath that goes down across the field on the left.

Go down through the woods and across the wooden bridge.

Take the right fork indicated by the yellow arrow on the marker post (9).

Follow the path along by the side of Dale Dike reservoir (10).

At the end of the reservoir follow the path down steps and across a wide bridge. Follow the track as it winds back up to the road. Just before the road look out for the stones that mark the position of the original dam that failed causing the Sheffield Flood.

Turn right and then go down Dale Road back to Low Bradfield.

Sands Lane and the car park will be on your left as you drop into the village.

The parish church, St Nicholas Church, is in the Gothic Perpendicular style and dates from the 1480s. It incorporates elements of an earlier church that may have been built in the 12th century. There is a green man roof boss, an Anglo-Saxon stone cross and a number of interesting memorials to be seen inside.

This unusual building at the bottom of Jane Lane was built in 1745 to allow relatives of the deceased to watch over the graveyard and apprehend bodysnatchers. Very few other buildings of this type now exist in Britain. In the 18th century, newly buried bodies risked being disinterred to be sold to medical schools for the study of anatomy. As stealing a corpse was only punishable by a fine or imprisonment, rather than transportation or execution, bodysnatchers found it sufficiently profitable to run the risk. The Anatomy Act of 1832 ended the trade by allowing bodies to be donated to medical schools.

Although we do not pass it on this walk, on the northwest edge of the village, close to the church, but covered by trees, is Bailey Hill, a man-made conical mound that is a Scheduled Ancient Monument. The date and purpose of its construction are unknown, though it has been interpreted as a Saxon fort, a Norman motte-and-bailey castle, or a place of public village assembly. David Hey, however, says there is no doubt that Bailey Hill is a motte-and-bailey castle, calling it, ‘One of the best preserved and most dramatic motte-and-baileys in Yorkshire.’

The reservoir was completed in 1869 and holds 560 million gallons of water.

The road was constructed in 1777 as a turnpike road by Han Winthrop Mortimer, Lord of the Manor of Bamford. It broadly followed an ancient packhorse route, known as Halifax Gate, which ran between North Derbyshire and the West Riding of Yorkshire. Mortimer wished to link Grindleford with the market town of Penistone to increase trade in wool and agricultural produce. Mortimer road would link at Penistone with the Doncaster – Barnsley – Woodhead – Manchester road, turnpiked in 1740 and the Sheffield – Huddersfield – Halifax road, turnpiked in 1777. At Grindleford it linked with the Sheffield – Ringinglow – Fox House – Buxton road which had been constructed in 1758.

The track is named after the Duke of Norfolk, who owned large parcels of land in this area. It is likely the track was used to allow access for grouse shooting, although it probably followed an earlier ancient route over the moors. G.H.B Ward, the well-known Sheffield rambler, once described the walk over the Duke of Norfolk’s road as the ‘wildest Yorkshire moorland walk south of Wharfedale.’ It was also the scene of a mass trespass in September 1932, when 200 ramblers walked from Bradfield to Abbey Brook in protest against the lack of public access to the moors. Since the Countryside and Rights of Way Act 2000, there has been open access to much of the moor.

Constructed in 1871, this is the smallest of the reservoirs in Bradfield Dale with a capacity of 453 million gallons. The name Strines may derive from the Old English word ‘strynds’ or ‘strinds’, meaning a rivulet or stream.

As the path continues across fields, there is a view of Hallfield House. This fine, 3 storey house was probably built by John Greaves in the c17th century, although the family had been in the area since the 1400’s. When Ralph Greaves died in 1565, the farm at Hallfield consisted of 40 acres of land, 20 acres of meadow and 20 acres of pasture, with common grazing rights on the adjacent moors (Hey 2002). The house was later owned by the Fitzwilliam (Wentworth) estate and was used as a shooting lodge and gamekeeper’s house. It is now a private house.

In 1864, the newly-built dam burst, causing the Great Sheffield Flood, which caused massive damage downstream along the rivers Loxley and Don and through the centre of Sheffield. Around 250 people lost their lives. The dam was rebuilt in 1875 on a smaller scale and holds 446 million gallons of water. Below the dam is a stone engraved C.L.O.B. (centre line old bank), which marks where the original dam wall would have stood, and a flood memorial stone erected in 1991 by Bradfield Historical Society to commemorate those drowned. Thornseat House was built after the disaster to house the Chief Engineer of the Sheffield Water Company so that he could oversee the reconstruction of the dam.