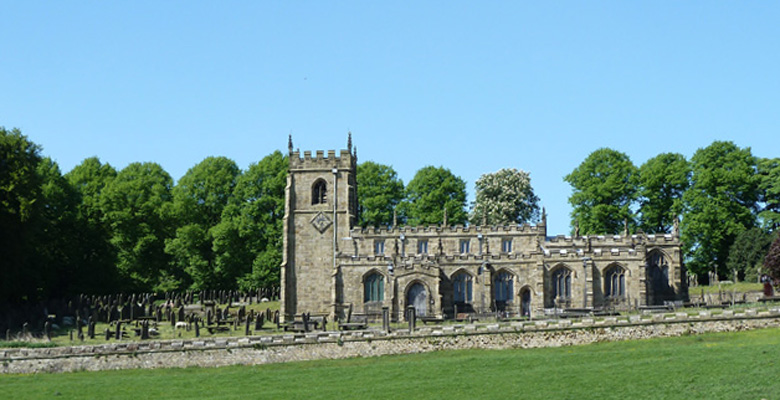 A short walk from Low Bradfield to High Bradfield and back.

This walk is sponsored by The Plough, Low Bradfield

Starting in Low Bradfield the route goes around the lower parts of the village before it climbs steadily across fields to the village of High Bradfield. After a short exploration of the church yard the route returns down to Low Bradfield by a path on the opposite side of the road to the ascent. The route affords excellent views across the countryside of the northern Peak District.

At the entrance to the car park go left out to the main road, Fair House Lane. Turn left again and go down past the bus stop towards Smithy Bridge Road (See Points of Interest 1).

Do not go over the bridge, instead continue down Mill Lee Road, towards Dungworth.

Pass the Bradfield Parish Council Offices (2) on your left and the derelict water works (3) on the right.

At the Plough Inn (4) turn left and go along New Road.

At the last house on the left turn left down the footpath along the drive of the house and then to the right of the house down the old path.

Notice the old paving slabs which have been worn down by many years of use. Take care as the slabs are uneven and may be slippery.

Continue across the bridge over the stream and at the junction with the road turn right (5).

On the opposite side of the road, to the left, are steep stone steps going between bushes into the field. Take this path.

Go up the hill keeping the wall to your left.

Go up the hill passing through two narrow gates. The path aims towards the church and runs parallel to the electricity supply poles.

As the path nears the road keep the wall close on your right. The path turns at the corner of the field and crosses a stone stile onto the road.

Take care on the road. This road is steep and has tights bend limiting visibility and can be busy.

Go up the hill for a short distance and then cross the stile on the left, taking the footpath into the field below the church (7).

Go straight up the field, aiming for the left hand end of the retaining wall in front of the church.

Go through the black metal gate and cross in front of the church on the top of the retaining wall. Follow the path left up through the large metal gate onto the lane.

There is a footpath just beyond the watch tower. The path leads through the churchyard and to the woods. Just above the church are the earthworks of a motte and bailey castle. (9)

Having explored the St Nicholas’ Church and churchyard, and perhaps paid a visit to The Horns public house (10), the route returns to Low Bradfield.

Instead of going down the hill and back the way you came, go through the gateway ahead and follow the wall gently down the hill.

Go through the next gateway and head down towards the bottom corner of the field, keeping the wall on your right.

Drop down through the trees to the metal gate.

Go through the gate, watching out for traffic, cross the road (Smallfield Lane), and go down the footpath opposite.

Continue down the path, down the stone steps (11) and over the narrow wooden bridge across the stream.

Turn left and follow the path back to the car park (12). Take care as the path is uneven and can be slippery.

The Parish Council Offices are housed in the former Wesleyan Chapel, built in 1817, and used as a temporary school between 1864 and 1867, until a new school was built to replace that washed away in the Great Sheffield Flood. The former Methodist Chapel, on the opposite side of the road, was built in 1899 and closed in 1993. It is now a private house.

On the right is the Filter Station, built in 1913 and extended in 1954, to purify water from the Strines, Dale Dike and Agden reservoirs. In 1930 it had the first telephone installed in Bradfield. The premises closed in 1994 following the completion of the new Water Treatment Works in the Loxley Valley.

This was originally a farmhouse before being converted to an inn in the mid c19th. The archway was used to take cattle into the auction yard at the rear of the building, but was blocked in during the 1960’s.

was formerly known as Kirkton. David Hey notes that an ‘open field by the church’ was known as ‘Kirktonfield’ in 1416. The village probably originally grew up around the church and motte and bailey castle.

The parish church, St Nicholas Church, is in the Gothic Perpendicular style and dates from the 1480s. It incorporates elements of an earlier church that may have been built in the 12th century. It contains many interesting memorials, including green man roof boss, brasses and an Anglo-Saxon cross found in Low Bradfield in 1886. The church hosts a number of events, including a week long Festival of Music in June each year. Simon Jenkins mentions the church in his book ‘England’s Thousand Best Churches’, and says “the view is glorious, enjoyed by the weather beaten gargoyles peering from under toppling pinnacles”.

This unusual building at the bottom of Jane Lane was built in 1745 to allow friends or relatives of the deceased to watch over the graveyard and apprehend bodysnatchers. Very few other buildings of this type now exist in Britain. In the 18th century, newly buried bodies risked being disinterred to be sold to medical schools for the study of anatomy. As stealing a corpse was only punishable by a fine or imprisonment, rather than transportation or execution, bodysnatchers found it sufficiently profitable to run the risk. The Anatomy Act of 1832 ended the trade by allowing bodies to be donated to medical schools.

Although we do not pass it on this walk, on the northwest edge of the village, close to the church, but covered by trees, is Bailey Hill, a man-made conical mound that is a Scheduled Ancient Monument. The date and purpose of its construction are unknown, though it has been interpreted as a Saxon fort, a Norman motte -and-bailey castle, or a place of public village assembly. David Hey, however, says there is no doubt that Bailey Hill is a motte-and-bailey castle, calling it, ‘One of the best preserved and most dramatic motte-and-baileys in Yorkshire.’

The present building was built around 1830 on the site of an earlier inn. It was also previously used as a farm. The private houses across the road from the Old Horns Inn were used as the Bradfield Parish workhouse between 1759 and 1847.

Kirkgate Steps are also known as the ‘Fairy Steps’. They are thought to be part of an old burial road to High Bradfield.

The sports field on the left was given to the village by the Ibbotson family who lived at Burnside House (the large house on the opposite side of the field), and is named after them. It is used today for cricket, bowling and tennis. The village hall is the focus for many activities, including a film club, local history and craft fairs, and farmers’ markets.