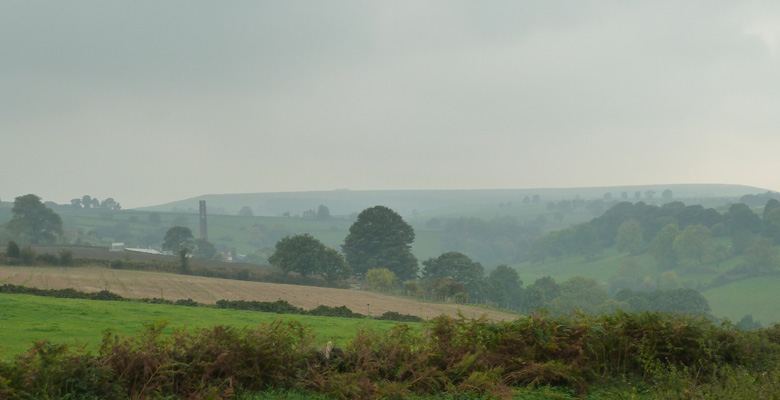 A walk in the Loxley Valley, near Sheffield.

This walk is sponsored by Bradfield Brewery

A walk above and along the Loxley Valley. The route takes in open countryside, passes through small villages and returns along the valley past with the derelict works that were originally established in the valley to make use of water power.

Walk down Loxley Road to the junction with Black Lane. .

At the junction turn right and go down Black Lane.

Continue down until the lane splits. Take the left hand fork down to the cottages. Go down the steps in front of the cottage on the left.

Turn right at the bottom of the steps and continue down the path.

At the factory entrance (2) take the path through the wall on the left.

Continue along the path and over two bridges.

The second bridge leads to woodland where the path is not initially clear.

Go straight on from the bridge. After 50m take the steep cobbled path up the hill to the left. The path has a handrail.

Keep going up the path until it emerges at the rear of the former Robin Hood Inn (3).

Go all the way around the front of the inn.

Take the public byway that goes up by the side of the inn and house.

At the track swing round keep to the wide track that goes up the hill with houses to the left and woodland to the right.

Continue up the track until it opens out onto a road on the housing estate.

Go up the road. After 100m take the footpath off to the right between two houses.

Follow the path through the woods. The path keeps close to the houses on the left.

The path comes out onto Acorn Drive. Turn right and follow Acorn Drive round to the junction on the right.

Take the first proper road to the right, which is Acorn Way.

This leads to Spout Lane. Turn left and proceed up the hill.

Near the top of the lane take the steps on the right that go up to Stannington Road.

Beware the steps open out onto the road with no pavement on this side of the road.

Turn right onto the road and head away from Stannington (4).

Pass the red brick house on the left and then take the track, Spoon Lane (5), down on the right just before the church.

Follow the track all the way down the hill. The track crosses the stream before climbing up to a sharp corner on Storrs Lane.

Turn left and climb up Storrs Lane (6) past the farm buildings.

Follow the road round to the left and continue to the junction. Keep right at the junction with Lee Moor Lane.

50m after the junction take the footpath on the left, just before the first house.

Go along the track and past the house, through the stile and into the fields.

Continue through the first field. Go across the second field aiming for the white gate in front of the cottage at the right hand end of the run of buildings.

Go through the stile by the gate and the follow the path up through the farm yard. This farm is the home of Our Cow Molly ice cream.

From the farmyard cross the road and go along Hill Top Road opposite, sign posted towards Glossop.

After 200m take the footpath to Dungworth on the right. The path goes up past the house, through the back yard and into a field.

Proceed down the field towards the village of Dungworth which is directly ahead.

Cross the stone stile onto Cliffe Hill. Turn left and take the road into the village.

Take the footpath that goes down to the left immediately after the Royal Hotel (7).

Follow the path down the hill. This section can be a bit boggy in wet weather.

Follow the path through the stile and down past the cottage.

Take the footpath down to the right by the metal gate just before the next buildings.

The path moves into woodland.

Before the path emerges from the woodland there is a junction with another well defined path.

Take the path that cuts back to the right. This path drops down and crosses the stream.

Go over the wooden stile and then keep to the left as much as possible.

Go through the stone stile and follow the path with the stream close by on your left.

When the path reaches the junction by the mesh fence of the waterworks, go left and follow the fence until it ends by the bridge over the river.

Cross the bridge to the large mill pond.

Take the road opposite and to the right down through the factory site.

Just before Storrs Bridge Lane goes off up to the left take the footpath through the wall on the right.

Go left on the path that runs on the embankment between the river and the mill pond feeder.

Part way along this path there is a large rectangular stone (9) which has markings indicating the flow level for the feeder.

Follow the path past the mill pond and down into the factory yard. Care should be taken as the footpath is also the roadway within the works.

Turn left and go along the yard and then take the road left up the hill.

Follow the road right away from the farm and on to Rowel Lane(10).

Turn left up Rowel Lane and continue up to Loxley Road (11).

Turn right and go along the road, past Loxley Nursery and back to the starting point of this walk.

The Admiral Rodney pub was built in the 1950’s to replace another inn called The Rodney, which was demolished.

Industry came to the Loxley area in the middle of the c17th when the first water-powered mills were set up on the River Loxley. Steel and iron forging and rolling mills were established with the Loxley Steel Works, the Green Wheel Steel Works, the Little Matlock Rolling Mill and the Olive Rolling Mill all becoming established industries by the river. Many of the mill ponds associated with these mills are still present on the river and provide a haven for fish and wildlife. Little Matlock Rolling Mill is a Grade II* listed building, dating originally from 1732. In the Great Sheffield Flood of 1864, the buildings were severely damaged and the owner claimed over £5000 in compensation. The present buildings date from 1882 and still are operated by Pro-Roll Ltd. as a rolling mill.

The pub was built in 1804 by Thomas Halliday, who also planted trees and shrubs in the area to replicate Matlock in Derbyshire, hence the name ‘Little Matlock’. Half of the building was originally cottages whilst the back half overlooking the woodland was named the Rock Inn. The pub was later renamed the Robin Hood in view of the legends associating Robin Hood with this area. The pub closed in 2011. In the c12th Loxley Chase was an extensive forest which stretched as far Sherwood Forest. Loxley is one of the locations claimed as the birthplace of Robin Hood.

In 1761 an inscribed brass plate (now called the Stannington Diploma) was found in a field at Stannington, stating that a son of Albanus had been given an honourable discharge after serving 25 campaigns with the Roman legions and was entitled to a grant of land or money. It is taken to suggest that there was some Roman settlement in this area.

Spoon Lane probably takes its name from Richard Spoone, who left a bequest in his will in 1652 for the support of a ‘preaching minister’ at Stannington. The present Unitarian Chapel building dates from 1741 and is still in use. Underbank Schoolroom (on the opposite side of the road from the chapel) was also established after Spoone left property for ‘paying for the learning of poor children…whose parents are willing but not able to keep them to school’. Until 1911, this was the only school in Stannington.

The name ‘Storrs’ may derive from an old Norse word meaning ‘a plantation or place growing brushwood’. The house on the right with the post box outside was formerly a shop. It closed in the 1960’s.

Built in the 1860’s, the pub functioned as a centre for sports and entertainment in the area. Cricket, football, fishing and running clubs all attracted a large following during the 1900’s. Local carols are still sung here at Christmas.

During the 1800s the area also became an important producer of refractory bricks for the expanding Sheffield steel industry. The bricks were used to line the furnaces and were made from gannister, a sort of sandstone. Many gannister mines existed in the area supplying the local firms of Thomas Wragg, Siddons Bros., Hepworths and Thomas Marshall. Production ceased in the area in the 1990s. This area was extensively damaged in the Great Sheffield Flood of 1864. Samuel Harrison, writing in 1864, described the effects in this area. “At the Loxley Old Wheel one life was lost, and several others were placed in imminent peril. When the flood reached this place, at three minutes to twelve, Joseph Denton, aged 14, son of Thomas Denton, one of the occupiers of the forge, and also his brother John Denton, aged 11, together with a man named Robert Banner, were working at the tilt, where it was usual for work to be kept up all night. The flood came upon them without the slightest warning, and only making a noise like a rushing wind; it burst open the doors, and knocked them all down. Banner managed to climb up the chimney, thence he got on to the beams, and made his way to a skylight, through which he escaped on to the roof. John Denton got up the shuttle pole, and stuck to it till the flood subsided a little, and then he escaped on to the roof of the building. Joseph Denton was not so fortunate; he was carried down the stream and drowned.”

This marks an agreement made in 1825 between two mill owners to maintain the levels of water in their millponds and goits. There were a number of disputes at this time between mill owners who claimed mills higher up the river were taking too much water and preventing them from working.

Rowel Bridge Mill was formerly situated at the bottom of Rowel Lane. 40 men are recorded as working there in 1794 making razors and knives. It was extensively damaged in the Flood of 1864 but rebuilt and is still now called Croft House.

The chapel (up the drive) was built in 1787. It closed in 1993, although the burial ground is still used. A number of victims of the flood are buried here. N.B. There is no public access to the chapel.