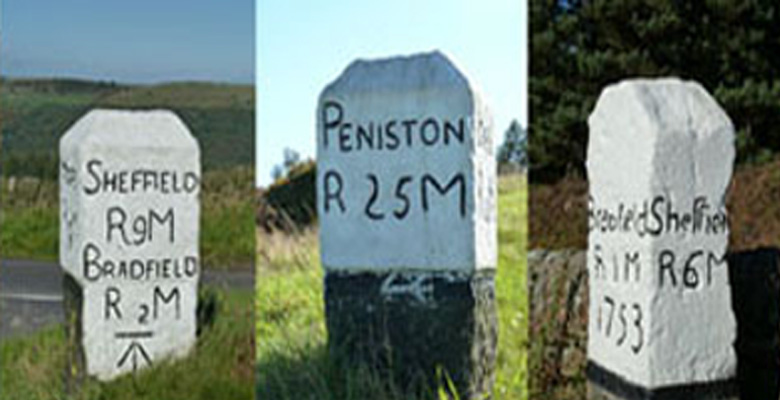 This walk is sponsored by The Old Horns Inn, High Bradfield

Go towards St Nicholas’ Church. (See Points of Interest 1) At the entrance to the church yard go to the right of the watchtower (2) and take the footpath through the grounds of the church.

Continue all the way through the church yard.

On passing through the stone stile turn left and take the path down the hill. Follow the path all the way down to the road.

Turn right and follow the road round to the gated entrance to Agden reservoir on the left. Follow the permissive path through trees along the side of Agden Reservoir (3), a Yorkshire Water facility.

The path follows close to the edge of the reservoir before turning up right and passing through a gate to a track.

Cross a wooden stile to take the diagonal path up the hill to the right immediately opposite gateway.

Follow the path along side of the wire fence, climbing steeply up the hill to cross a wooden stile.

Follow the path straight ahead along the ridge below the wall.

Continue through the wooden gate stile and up to Agden Side Road.

Cross the road and go over the ladder stile opposite and into the field .

Drop down to the gateway on the left. This section can be muddy in wet weather.

Continue up towards the stone gateway into the field. Just before the field entrance take the path to the right which loops around the field.

Continue across the moor until you reach the wooden gate.

Pass through the gate and onto the main road, which is Mortimer Road (4).

This road can be busy and the path emerges on a blind bend.

Turn right and go up the road. Notice the deep ditch and embankment on the left hand side of the road. This is an ancient monument known as the Bar Dyke (5).

A short way up the road you will pass the Ordnance Survey marker enclosed by a green fence.

A short distance further along you will find the first of the milestones (6) at the junction of Mortimer Road and Penistone Road.

From the milestone go across the road to the bridle way which passes through the metal gate on the right.

Drop down the hill, joining and then turning left to continue along the track between the high stone walls.

Follow the track for some distance, passing through a gate into the farm yard and continuing through along the farm drive to its junction with the road.

There is a large quantity of farm machinery along the drive.


At the junction with Canyard Hills Lane turn right.

The road starts to rise steeply. About two thirds of the way up the hill take the footpath up on the banking off to the right.

There are excellent views across the Ewden valley towards Bolsterstone from this point.

Follow the path up the hill and over White Lee Moor.

Keep on the path until you pass through the slit stile onto Penistone Road.

The route will continue over the ladder stile opposite after a short diversion to see the other milestone (7).

Turn left and go up the hill. After about 100m you will find the second milepost.

Return to the ladder stile and cross into the field.

The path is not clear from the ladder stile.

Head off perpendicular to the road. Go up towards the crest to the hill.

After 100m you should spot a marker post. The path then follows the edge of the hill and is identified by a number of marker posts.

Continue until you reach a wooden bench facing the view across Dale Dike and Strines Reservoirs to Win Hill.

Take the footpath that drops steeply down the hill.

Aim for the wooden gate at the bottom left of the field.

Turn left and go past Rocher Head Farm and along the track past the ruined farm buildings and into the fields.

Take the path that runs above the line of hawthorn bushes.

Continue over the ladder stile (or past as there is no fence) and on over the stone stile.

Continue in the same direction until you reach the wall and gateway. Drop down to the right and join the forest track, turning left onto the track.

Follow the track round, crossing the stream. Go through the wooden gate and up the hill. The trees in this area are scheduled for felling in November 2010.

Follow the path up the hill and as it turns right through a stone gateway.

Follow the path along all the way back to the churchyard and then to High Bradfield.

The parish church of St Nicholas is in the Gothic Perpendicular style and dates from the 1480s. It incorporates elements of an earlier church that may have been built in the 12th century. There is a green man roof boss, an Anglo Saxon cross and a number of interesting memorials to be seen inside.

This unusual building at the bottom of Jane Lane was built in 1745 to allow relatives of the deceased to watch over the graveyard and apprehend bodysnatchers. Very few other buildings of this type now exist in Britain. In the c18th, newly buried bodies risked being disinterred to be sold to medical schools for the study of anatomy.  As stealing a corpse was only punishable by a fine or imprisonment, rather than transportation or execution, bodysnatchers found it sufficiently profitable to run the risk. The Anatomy Act of 1832 ended the trade by allowing bodies to be donated to medical schools.

The reservoir was completed in 1869 and holds 560 million gallons of water.

The road was constructed in 1777 as a turnpike road by Han Winthrop Mortimer, Lord of the Manor of Bamford. It broadly followed an ancient packhorse route, known as Halifax Gate, which ran between North Derbyshire and the West Riding of Yorkshire. Mortimer wished to link Grindleford with the market town of Penistone to increase trade in wool and agricultural produce. Mortimer road would link at Penistone with the Doncaster – Barnsley – Woodhead – Manchester road, turnpiked in 1740 and the Sheffield – Huddersfield – Halifax road, turnpiked in 1777. At Grindleford it linked with the Sheffield – Ringinglow – Fox House – Buxton road which had been constructed in 1758.

Mortimer hoped to make a profit from the tolls charged to users of the road and built a number of tollhouses (or ‘turnpikes’) along the route. (A former tollhouse can still be seen at the junction of Mortimer road and Manchester road at Midhopestones. The single storey building on the left with a bay window is Toll Bar Cottage and was originally a tollhouse on the Sheffield to Manchester turnpike road.)
However, Mortimer road was not profitable and Hans Winthrop Mortimer died bankrupt in 1807.  The road passed through no major centres of population to provide passengers for stagecoaches and failed to attract freight traffic as heavy wagons preferred less hilly routes. After 1840, railways also took trade away from roads. Some parts of Mortimer road were bypassed by new roads, such as the stretch near Ladybower reservoir which was bypassed by the Sheffield – Glossop road constructed in 1822.  Stretches of the old road can still be seen between Moscar Head Farm and Ladybower Inn, where it is now a bridle way.

The ditch and embankments stretching for some 400 metres at the top of the hill form part of an ancient monument known as the Bar Dyke. The age of the earthwork is uncertain but it may date from the Bronze or Iron Age and is thought to have been a defensive structure or territorial boundary.

This milestone at the junction of Mortimer and Penistone road is likely to have existed before the construction of Mortimer road as it is dated 1740. It shows directions and distances to Penistone, Sheffield, Hope and Bradfield.

This milestone, called Handsome, or Hanson, Cross is dated 1753 and may take its name from a wayside cross that is said to have previously existed on the opposite side of the road. The stone shows directions and distances to Penistone, Sheffield and Bradfield.

A number of other c18th milestones still stand in the Bradfield area. An interesting extension to this walk can be made to view these.

The first milestones were erected by the Romans to mark every thousandth double-step with a large cylindrical stone. The Latin for thousand was ‘mille’ and the distance was 1618 yards. After the Roman military roads of the first century AD, highways developed to meet local needs. Ancient ridgeways, pack-horse ways and other tracks criss-crossed the country. In 1555, an Act of Parliament made townships responsible for the upkeep of local roads and in 1667 County Justices were ordered to erect guide-posts on the moors and where routes intersected to guide travelers.

From 1767, mileposts were made compulsory on all turnpikes, to inform travelers of direction and distances, to help coaches keep to schedule and for charging for changes of horses at the coaching inns. The milestones in the Bradfield area mostly date from this period. The stones (also called guidestoops) are often beautifully carved, inscribed with old spellings of place names and sometimes also with carved hands pointing directions and indicating distances. Some early guidestoops show distances in ‘long’, or ‘Yorkshire’ miles, which were approximately one third longer than the statute mile in use today.

Early milestones are fast disappearing; according to the Yorkshire Milestones Society; only around 9000 survive in the UK. 20 have been identified in the Bradfield area and 120 in Kirklees. Many milestones were removed in World War ll to baffle German invaders and not all were replaced afterwards. Others were demolished as roads have been widened, or have been damaged by vehicles.

The Milestone Society was established in 2001 to record milestone data, to research their history, and to promote awareness of the need for appropriate restoration or conservation.