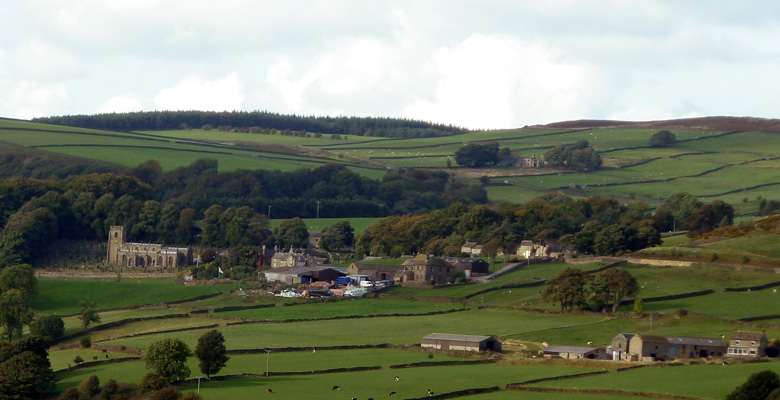 Starting in Low Bradfield the walk climbs to Fox Holes and then along the valley, affording excellent views across to High Bradfield. The route then drops through woodland before climbing across fields to the village of Dungworth. From Dungworth the route drops down to the river at Stacey Bank before returning to Low Bradfield by the side of Damflask reservoir.

From the car park return to Fair House Lane. Turn left and go down past the bus stop.

Pass the Bradfield Council Offices (See Points of Interest 1) and the Plough Inn (2).

Go up the hill to the T junction, past the disused Water Works Filter Station (3).

The castellated Fox Holes holiday cottages (4) are visible all the way up the hill.

Turn left and go along the road until you reach the next road junction.

Turn right up the road, sign posted to Ughill and Strines.

Continue past the farm house and follow the road as it swings round to the right.

After 300m from the farmhouse take the footpath down into Ughill Woods.

Follow the path down the slope and through the woods.

Continue down, ignoring the Yorkshire Water permissive path, cross the stream and then climb back up the other side, emerging over the ladder stile onto Corker Lane.

Turn left and proceed along the lane until you approach the large house on the left.

As you near the large house take the footpath on your right. The marker post is partially hidden by foliage.

Go up by the wall and cross the stone stile at the top.

Aim for the farm buildings at Tom Hill (5) to your left.

Pass the farm buildings and then take the slightly raised track that curves across the field to the wooden gate into the lane.

Go down the farm lane bounded by low stone walls.

At the T junction turn left and go into the village of Dungworth (6). Beware of traffic

At the main road turn right.

Take the path that drops down between the church and the pub.

The path is a bit over grown at first but improves further down.

Continue down the path as it swings right.

Go through the stone stile and down the fenced track and past the farm house, emerging out onto Dungworth Green.

Turn left and then take the footpath off to the right just before the next farm building.

Continue down the path through woodland.

The path curves round to the left and comes out into fields.

Follow the path across the field and down a sloping track towards the river.

At the bottom of the slope continue left to the stone stile by the metal gate.

Go along the path with the high wall of the pond on your left.

Cross the bridge over the steam and ascend Stacey Lane (11) all the way to the main Loxley Road. (Turn right for the Nag’s Head public house (owned by Bradfield Brewery).

Beware of traffic Turn left and follow the road towards Damflask Reservoir (12).

Cross the two roads that lead across the dam wall.

Take the path that goes in on the left, down to the side of Damflask Reservoir.

Follow the Yorkshire Water permissive path all the way until it emerges onto Lamb Hill.

Turn left and follow the road back to Low Bradfield.

Continue past the bowling green and then over the bridge.

Turn right, the past the bus stop and back to the car park.

The Parish Council Offices are housed in the former Wesleyan Chapel, built in 1817, and used as a temporary school between 1864 and 1867, until a new school was built to replace that washed away in the Great Sheffield Flood. The former Methodist Chapel, on the opposite side of the road, was built in 1899 and closed in 1993. It is now a private house.

This was originally a farmhouse before being converted to an inn in the mid c19th. The archway was used to take cattle into the auction yard at the rear of the building, but was blocked in during the 1960’s.

On the right is the Filter Station, built in 1913 and extended in 1954, to purify water from the Strines, Dale Dike and Agden reservoirs.  In 1930 it had the first telephone installed in Bradfield.  The premises closed in 1994 following the completion of the new Water Treatment Works in the Loxley Valley.

It is not known why Foxholes Farm was built with castellated walls; it may have been to complement the church on the opposite side of the valley, but it can probably best be described as a ‘folly’.  www.foxholesfarm.co.uk

The farm has an ancient, timber-frame cruck barn. Several such barns survive in the Bradfield area.

Dungworth village is thought to date back to the c13th, but the meaning of the name is uncertain. One meaning suggests a dwelling that is partly underground, another suggests it refers to a dwelling with a dung-covered roof.

The church, built in 1850, was a major focus of village life in the c19 and early c20th. Six coaches were needed to accommodate all the people attending the annual outing to Thornhill in the 1920’s.

This is the single storey building on the main street. Originally built as a rehearsal room for the local brass band in the 1870’s the hall was known as the Band Room, then the Dungworth Village Institute, or the ‘Stute’. The present building dates from 1968.

The house on the right, and at an angle to the main street, used to be ‘Harper’s shop’. until the 1970’s. It sold everything from flour to paraffin. Villagers recalled flour being sold by weight from a big bin; butter and cheese being cut from the barrel and paraffin being stored in a big tank to be measured out in a half-gallon can to customers.

Built in the 1860’s, the pub functioned as a centre for sports and entertainment in the area. Cricket, football, fishing and running clubs all attracted a large following during the 1900’s. Local carols are still sung here at Christmas.www.royalhotel-dungworth.co.uk/

A water wheel, known as Stacey’s Wheel, was located near here in the c18th. 12 men were employed as grinders in 1794 making saws, knives and razors. The mill was washed away in the Great Sheffield Flood of 1864 and nothing now remains.  The round, concrete structure is a disused, compensation dam which was built in the 1920’s.

The reservoir was constructed in 1867 as one of a group of reservoirs in the area built to supply both fresh drinking water and a guaranteed supply of running water to the population and industries of Sheffield. It has a capacity of 1,123 million gallons and a maximum depth of 88 feet. Today it is also used by rowing and sailing clubs and for fishing. Damflask Reservoir takes its name from Damflask village which stood just about where the reservoir embankment is today. Early maps show that a corn mill, paper mill, wire mill, public house and a cluster of houses existed in 1850. Nothing was rebuilt when the village was washed away in the flood as plans were already in place to construct the reservoir. www.yorkshirewater.com