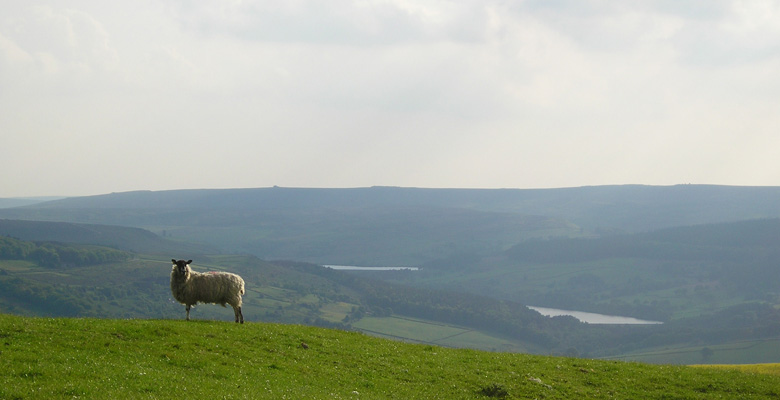 A walk around Onesmoor above High Bradfield.

Description of the walk around Onesmoor.

A delightful walk around Onesmoor above High Bradfield. The route has superb views over Bradfield to Strines, across to Sheffield, and over to Wharncliffe woods. The walk crosses farm land providing the opportunity to observe a wide variety of wildlife .

This walk is sponsored by The Old Horns Inn, High Bradfield

Start from the bus stop or road by The Old Horns Inn (See Points of Interest 1).

Go along Brown House Lane in a south easterly direction towards Sheffield, past the telephone box.

Turn left and ascend up Kirk Edge Road. About 50m after the junction with Little Lane there is a large ladder stile on the right hand side of the road.

Cross the stile and head across the field towards Castle Hill (2).

Cross two more stiles and then enter onto the Castle Hill earthworks.

Continue in a south easterly direction until the wall on your left swings left. Continue along the ridge to the ladder stile.

Cross the stile and take the path down to the next ladder stile and on to the lane.

Turn left and proceed up the lane. Follow the lane as it swings right and on to Cliffe House Farm.

As you enter the farm yard turn left and go through the gate and up the hill along the lane.

The official footpath cuts diagonally across the top 150m of the field. However, the field may well have a crop and it is sensible to proceed to the top of the lane and turn right onto Kirkedge Road (3).

Follow the road for a third of a mile, then take the path off to the left just before the trees around the convent (4).

Follow the path keeping close to the wall on your right.

At the end of the wall follow the path across the field, continuing in almost the same direction as the line of the wall you have been following, which is north.

Keep going across the large field. Cross the wall and the smaller field until you cross the stile into the road called Onesmoor Bottom.

Turn left and follow the road to the cross roads.

Turn left at the cross roads and head uphill towards the trees.

As you reach the trees take the footpath on your left and marked to Bradfield.

The path swings right beyond the trees and climbs across two more fields.

Cross the narrow track and into the next field. The exit from the field is diagonally to your left in the corner of the field.

This is the peak of Onesmoor.

Cross the stile and cross the road to the footpath opposite to Bradfield.

Go straight across the field. There is a stile about 150m right of the main gate into the field. The ground at the bottom of the field is a bit boggy, so tread carefully.

Cross the road taking the marked foot path into the field.

Turn immediately left and go a few metres along until you reach the track, then continue towards High Bradfield.

Before starting the walk, it is worth taking a few minutes to explore the village of High Bradfield.

High Bradfield was formerly known as Kirkton. David Hey notes that an ‘open field by the church’ was known as ‘Kirktonfield’ in 1416. The village probably originally grew up around the church and motte and bailey castle.

The parish church, St Nicholas Church, is in the Gothic Perpendicular style and dates from the 1480s. It incorporates elements of an earlier church that may have been built in the 12th century. It contains many interesting memorials, including green man roof boss, brasses and an Anglo-Saxon cross found in Low Bradfield in 1886. The church hosts a number of events, including a week long Festival of Music in June each year. Simon Jenkins mentions the church in his book ‘England’s Thousand Best Churches’, and says “the view is glorious, enjoyed by the weather beaten gargoyles peering from under toppling pinnacles”.

This unusual building at the bottom of Jane Lane was built in 1745 to allow friends or relatives of the deceased to watch over the graveyard and apprehend bodysnatchers. Very few other buildings of this type now exist in Britain. In the 18th century, newly buried bodies risked being disinterred to be sold to medical schools for the study of anatomy. As stealing a corpse was only punishable by a fine or imprisonment, rather than transportation or execution, bodysnatchers found it sufficiently profitable to run the risk. The Anatomy Act of 1832 ended the trade by allowing bodies to be donated to medical schools.

Although we do not pass it on this walk, on the northwest edge of the village, close to the church, but covered by trees, is Bailey Hill, a man-made conical mound that is a Scheduled Ancient Monument. The date and purpose of its construction are unknown, though it has been interpreted as a Saxon fort, a Norman motte -and-bailey castle, or a place of public village assembly. David Hey, however, says there is no doubt that Bailey Hill is a motte-and-bailey castle, calling it, ‘One of the best preserved and most dramatic motte-and-baileys in Yorkshire.’

The present building was built around 1830 on the site of an earlier inn. It was also previously used as a farm. www.theoldhorns.co.uk

The private houses across the road from the Old Horns Inn were used as the Bradfield Parish workhouse between 1759 and 1847.

The building at the top of Woodfall Lane was built in 1841 as the High Bradfield Church of England Day School. It was also used as the Church Hall before becoming a private house.

Turn to the right from The Old Horns Inn to begin the walk.

About 500 metres to the southeast of the village is Castle Hill, a site is marked on old maps as a ‘supposed Saxon encampment’. However, the date or purpose of the site is unknown. David Hey (1979) suggests it may be a natural feature of the landscape although admits that it may have been used a look-out post.

On 18 March 1782, Nathan Andrews was attacked by Francis Fearn and murdered on the road at Kirk Edge. Fearn had enticed the Sheffield clockmaker to High Bradfield on the pretext of starting a club to purchase clocks. Following his trial and execution in York four months later, Fearn’s body was hung in chains from a gibbet on Loxley Common. The gruesome remains were said to have still been there several years later.

The high walls on Kirk Edge Road conceal a convent. Built in 1871, the building was originally an Industrial School for Girls. This was a term used for an orphanage where children worked to pay for their keep. The girls here did laundry work. This closed in 1887 and the building was then used as a Reform School for Boys for several years before again becoming empty. The building was given by the Duke of Norfolk to an order of Carmelite nuns and the Convent of the Holy Ghost opened in 1911. The name was later changed to that in use today, the Kirk Edge Carmelite Monastery. It is a closed order and the nuns live a life of total seclusion.

Ordnance Survey map OL1 Dark Peak is recommended for all the routes on this web site.