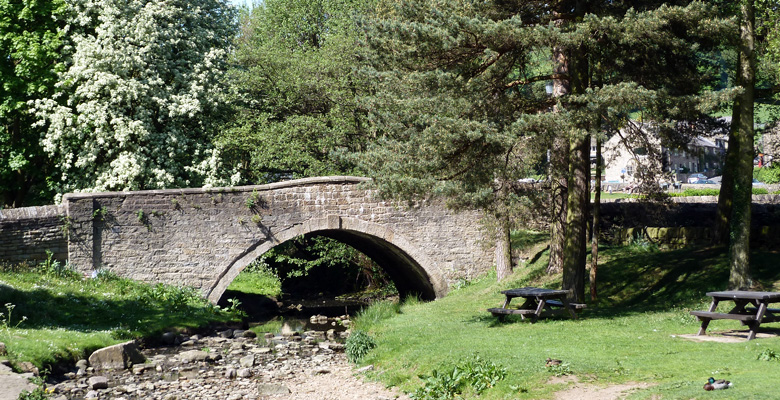 A short walk around historic Low Bradfield. The walk take in many local landmarks including buildings that were affected by the Sheffield flood of 1864 when the Dam above Low Bradfield gave way.

Starting from the village car park the stream on the left is AGDEN BECK which comes from AGDEN RESERVOIR and joins DALE DYKE BECK a hundred yards downstream forming the River Loxley before flowing into Damflask Reservoir.

The house on the right is NETHER FARM built around 1820.

Leaving the car park and bearing left the former LOW BRADFIELD JUNIOR & INFANT SCHOOL and SCHOOL HOUSE are on your right. The school was built in 1867 to replace one on a different site that was washed away in the SHEFFIELD FLOOD OF 1864. The school closed in 1985 with 32 scholars being transferred to nearby DUNGWORTH SCHOOL. The school and house have been sold to a private buyer.

After passing the bus shelter, bear right into MILL LEE ROAD and cross CHAPEL BRIDGE (which which was completely washed away in the flood). Below the bridge was once a sheep/ penfold where livestock were washed before being auctioned at the nearby PLOUGH INN. The building on the left is the former WESLEYAN CHAPEL, built in 1817 and housed 154 scholars. It was a temporary school following the destruction of the old school by the flood of 1864; it is now the headquarters of BRADFIELD PARISH COUNCIL. On the wall below the building is a stone dragon rescued from a derelict works in OUGHTIBRIDGE. On the right is the new WESLEYAN CHAPEL opened in 1899 at a cost of £1585 to seat 190 adults. It held its last service in August 1993 and was subsequently sold to a private buyer for conversion to a house. Next on the right are the FILTER HOUSES, built in 1913 and extended in 1954, which used to filter water from STRINES, DALE DYKE and AGDEN reservoirs. In 1930 it had the first telephone installed in Bradfield. The premises closed in 1994 following the completion of the new Water Treatment Works in the Loxley Valley. On the left are six Council houses and a private house built during the 1960s.

Turn left at the PLOUGH INN, (the road ahead goes to Ughill) which was originally built as a farmhouse, listed as a BEERHOUSE in 1841 and officially listed by the brewery in 1847. The archway was blocked in during 1960s when alterations took place; it was previously used to take cattle into the auction yard at the rear of the building. The houses on the left are PLOUGH COTTAGES. Next on the left is GLEBE COURT, which was completed in 1990/91 in a joint venture between PEAK DISTRICT NATIONAL PARK, BRADFIELD PARISH COUNCIL and SHEFFIELD CITY COUNCIL as a ‘low cost housing scheme’ to cater for local needs. All residents must have local connections to qualify for tenancy. Across to the right, in the distance is FOXHOLES FARM with its ‘castellated’ walls and can probably best described as a ‘folly’.

Turn left at the former POLICE HOUSE built cl960 (the original police house was in the middle house in a row of cottages half a mile further down the road) This is SCHOOL LANE; the farm on the right is MILL FARM, whilst on the left is FAR FOLD built in 1735 which withstood the 1864 flood. In the area close to the bridge stood the original school built around 1706 which was completely destroyed in the flood. The headmaster Mr. NICHOLLS and his family managed to escape to safety by running up the steps opposite the end of the bridge and on to higher ground. DAMFLASK RESERVOIR is on the right.

After crossing the bridge, turn left. On this site stood a three storey corn mill;records show a corn mill at Bradfield from around 1218. The last corn mill replaced one destroyed in the flood which was driven by a water turbine (as opposed to a water wheel for the previous mills). Unfortunately the corn mill caught fire in 1940 and was completely destroyed and never rebuilt. The mill race and dam remains can be seen over the wall on the left just before reaching SMlTHY GARAGE. The garage was previously a BLACKSMITHS SHOP until the late 1930s.

Cross the road carefully. The sports field (official name DODGE CROFT) was donated by Mr. IBBOTSON (note the memorial plaque/stone on the wall) and accommodates BOWLS, CRICKET, TENNIS as well as the VILLAGE HALL.

Bear right keeping beside the field wall. The group of houses opposite are BURNSIDE COTTAGES, the earliest of which dates back to around 1625, (it is believed that this is where the first victim of the flood occurred when a two day old baby was washed from its mothers arms) whilst behind is THORN HOUSE, where the mill owner at the time of the flood resided.

Moving further on, BURNSIDE HOUSE is the large house on the right, after which we come to WOODFALL LANE which leads to HIGH BRADFIELD. This piece of road is referred to locally as ‘The Street’ with the CAFE / POST OFFICE / VILLAGE SHOP on the right and the former CROSS INN on the left comer. The inn closed around 1980 and was converted into a private house.

Do not turn up WOODFALL LANE, but walk along towards THE SANDS, with the VILLAGE HALL on the left. The new village hall opened in 2007 replacing the previous one built c1936.

Cross the stream by the footbridge to return to the car park.

Low Bradfield and the Great FloodDownload
Bradfield Past and PresentDownload

Ordnance Survey map OL1 Dark Peak is recommended for all the routes on this web site.