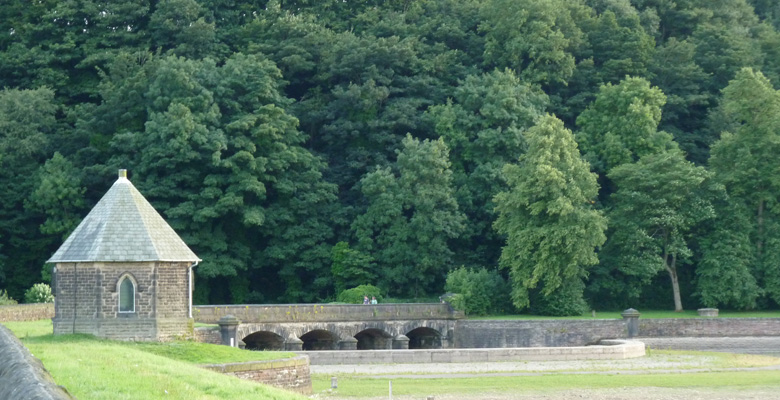 A loop from Low Bradfield to High Bradfield and Agden Reservoir

From Low Bradfield the route climbs through fields to High Bradfield. The route passes St. Nicholas’ Church and Bailey hill, and then passes through woodland before crossing more open land. The final section is by Agden Reservoir.

From the car park go down The Sands, and turn left and then left again over Smithy Bridge.(See Points of interest 1)

Follow Smithy Bridge Road and then at the corner by the garage (2) go east along Lamb Hill signposted towards Loxley (3).

After about 250m there is a lane which forks off and upwards on the left. Take this path.

About 100m before you reach Mill Farm (on the left above the road) there is a footpath on your left by a bush. There is a square green footpath marker.

Go over the stile and follow the path behind the farm.

Go across the field keeping the wall on your right. Head for the stone stile at the gap in the trees at the bottom of the field. Take care as many of the stiles on this path are in poor condition.

Go over the stile and immediately pass through the narrow stone stile on your right into the upper field.

Cross this field and the next aiming for the ladder stile near the trees on the far field boundary.

From the ladder stile head up the banking to the wall and wooden stile.

There isn’t much of a stone stile remaining but there is a wooden stile immediately over the wall.

Having entered the field continue east keeping close to the wall on your right.

At the next field boundary you will be able to see a ladder stile diagonally across the field. Follow the edge of the field around, keeping the wall on your right until your reach the stile.

You will now see two more ladder stiles across the next two fields and up to the road.

Cross the fields and stiles onto Kirk Edge Road.

Cross the road taking the lane which is more or less opposite the stile.

Follow the lane up hill, past the cattle shed. Swing left with the lane and continue up hill.

Swing left again as you pass what remains of a holiday chalet.

Continue along the lane in the direction of High Bradfield.

100m from the road there is a ladder stile over the wall on the right.The path goes up the hill to another ladder stile.

At the top of the hill follow the ridge towards High Bradfield.

Pass over the earth works of Castle Hill (4) and drop down to the stiles at the bottom right corner of the field.

Cross the small fields in the direction of the white house.

When your reach the road, turn left and go into High Bradfield (5).

In High Bradfield take the cobbled road in front of the Old Horns Inn (6) and head towards St Nicholas’ Church (7).

Just before the gates to the church turn right and then take the path behind the watch house (8) through the church yard.

At the end of the church yard enter the woods. Take the path to the right, down into the woods. Do not take the extreme right path that leads up to Bailey Hill (9).

Take the path out of the wood left as it drops down to the gate and the stream.

Cross over the bridge over the stream and take the track that swings round to the left.

After 200m the path reaches some gateways. Take the gate in front of you and rise up into the field above.

Head across and uphill to reach the main path.

At the end of the field the path reaches a stone stile. Cross the stile into the next field.

Across the field there is a ladder stile next to a broken down wall. Cross this wall into the upper field.

Continue heading the same north westerly direction across the field.

I saw some weasels in this area on a previous walk

The path leads to the derelict farm building at Rocher Head farm.

Follow the lane past the buildings and the barn. Continue along the lane, swinging left up to Smallfield Lane.

Cross the road and take the footpath over the stile into the field opposite.

Head down the field and then turn left to the stile out of the field and onto Agden Side Road. Take the path opposite through the heather.

The path turns left and passes through a wall before tracking along the edge of the valley, back towards Agden Reservoir.

There are some good views from here, and there is a well-place bench to sit and admire the scenery.

When the path reaches the wall it turns right and drops steeply.

The path enters the former woods and continues down until it turns left and goes down to Agden Reservoir (10).

Turn right along the lane.

After a short distance you will see the bridge across the stream. Cross the bridge and go through the wooden gate.

The right of way goes up from the gate to the lane and then left along the lane towards Low Bradfield.

There is now a concessionary path by the reservoir.

Follow the path through the woods, taking the lower route when options arise.

You will eventually end up on the lane which ever route you take.

Follow Windy Bank past the reservoir and down to the T junction (11). Turn left down Fair House Lane (12). The car park is on the left.

This building was a blacksmith’s shop until the late 1930’s. If you look over the wall after passing the garage, you will see the remains of Low Bradfield Corn Mill.

Castle Hill is marked on old maps as a ‘supposed Saxon encampment’. However, the date or purpose of the site is unknown. David Hey (1979) suggests it may be a natural feature of the landscape although admits that it may have been used a look-out post.
5. High Bradfield, was formerly known as Kirkton. David Hey notes that an ‘open field by the church’ was known as ‘Kirktonfield’ in 1416. The village probably originally grew up around the church and motte-and-bailey castle.

The present building was built around 1830 on the site of an earlier inn. It was also previously used as a farm. Parish Workhouse. The private houses across the road from the Old Horns Inn were used as the Bradfield Parish workhouse between 1759 and 1847. www.theoldhorns.co.uk

The parish church, St Nicholas Church, is in the Gothic Perpendicular style and dates from the 1480s. It incorporates elements of an earlier church that may have been built in the 12th century. It contains many interesting memorials, including green man roof boss, brasses and an Anglo-Saxon cross found in Low Bradfield in 1886. The church hosts a number of events, including a week  long Festival of Music in June each year. Simon Jenkins mentions the church in his book ‘England’s Thousand Best Churches’, and says “the view is glorious, enjoyed by the weather beaten gargoyles peering from under toppling pinnacles”.

This unusual building at the bottom of Jane Lane was built in 1745 to allow friends or relatives of the deceased to watch over the graveyard and apprehend bodysnatchers. Very few other buildings of this type now exist in Britain. In the 18th century, newly buried bodies risked being disinterred to be sold to medical schools for the study of anatomy.  As stealing a corpse was only punishable by a fine or imprisonment, rather than transportation or execution, bodysnatchers found it sufficiently profitable to run the risk. The Anatomy Act of 1832 ended the trade by allowing bodies to be donated to medical schools.

Although we do not pass it on this walk, on the northwest edge of the village, close to the church, but covered by trees, is Bailey Hill, a man-made conical mound that is a Scheduled Ancient Monument. The date and purpose of its construction are unknown, though it has been interpreted as a Saxon fort, a Norman motte-and-bailey castle, or a place of public village assembly. David Hey, however, says there is no doubt that Bailey Hill is a motte-and-bailey castle, calling it, ‘One of the best preserved and most dramatic motte-and-baileys in Yorkshire.’

The reservoir was completed in 1869 and holds 560 million gallons of water. The word ‘agden’ means ‘valley of the oak trees’.

The ruined barn near at the end of the road has a plaque on the wall stating that in 1826 the curate was solely responsible for paying for the rebuilding of the barn.

Fairhouse Cottages used to stand on the site of the bus turning circle, but were demolished in the 1970’s. There used to be a general grocer’s shop, selling everything from sweets to pins and paraffin, at the top of Fairhouse Lane. Fairhouse Farm stands below the turning circle and is one of the oldest houses in the area, dating from the 1630’s. It was originally called Swinden House.