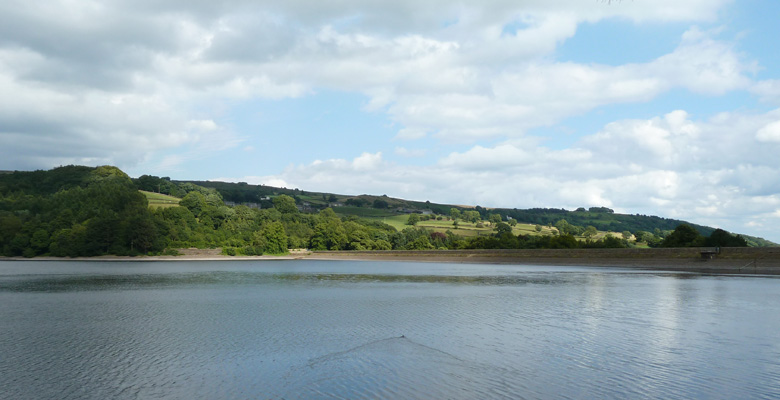 Damflask Reservoir walk gpxRight click and select – Save link as

From the car park head back along The Sands (See Points of Interest 1). The house on the right is Nether Farm built around 1820.

Turn left onto Mill Lee Road (2) and then over the bridge onto Smithy Bridge Road, past the bowling green and Cricket (3).

Bear right onto Lamb Hill (4). Continue along the road for about 400 metres, past a track over the bridge (5) on the right and the lane up to the farm on the left. Just before the road rises and swings to the left take the path to the right, through the fence, by the notice boards, and follow the route by the side of the reservoir.

Continue along by the reservoir (6) passing the sailing club.

The path rises up and meets Loxley Road. Turn right and go down the road until you reach New Road which crosses the dam wall. Go along the pavement of New Road across the dam wall.

After crossing the dam there is the dam keeper’s house. Immediately after the house take the path on the right, through the hedge and down to the reservoir.

Follow the path along the side of the reservoir heading back towards Low Bradfield (7).

As you reach Low Bradfield cross turn right onto School Lane (take care as the flagstones are uneven and the path can be slippery.) Cross the bridge. Then turn left onto Lamb Hill and return to the Village. Retrace your steps back to the car park or bus stop.

This walk is across land owned by Yorkshire Water. Their web site has a range of walks available.

The houses on the right were formerly Low Bradfield School and the teacher’s house, built in 1867 to replace an earlier building near School Lane which was washed away when the Dale Dike dam burst.

The sports field on the left was given to the village by the Ibbotson family who lived at Burnside House (the large house on the opposite side of the field), and is named after them. It is used today for cricket, bowling and tennis. The village hall is the focus for many activities, including a film club, local history and craft fairs, and farmers’ markets.

This building was a blacksmith’s shop until the late 1930’s. If you look over the wall after passing the garage, you will see the remains of Low Bradfield Corn Mill. This was a three storey building, built to replace an earlier structure which was washed away in the flood. It burned down in 1940, when it was operated by Mr. Jehu Crapper. Old documents show a corn mill existed in Low Bradfield as early as 1219.

The reservoir takes its name from Damflask village which stood where the reservoir embankment is today. Early maps show that a corn mill, paper mill, wire mill, public house (the Barrel Inn) and a cluster of houses existed in 1850. The village was almost entirely washed away when Dale Dike dam burst on 11th March 1864, causing the Great Sheffield Flood. Nothing was rebuilt as plans were in place prior to the flood to construct the reservoir.
Damflask reservoir was constructed in 1867 as one of a group of reservoirs in the area built to supply both fresh drinking water and a guaranteed supply of water to the population and industries of Sheffield. It has a capacity of 1,123 million gallons and a maximum depth of 88 feet. Today it is also used by rowing and sailing clubs and for fishing.

Around 250 people lost their lives as the flood water from the Dale Dike dam tore down the Loxley Valley and into Sheffield, but there was only one fatality in Low Bradfield village. A one day old baby, the child of Joseph Dawson, the village tailor, was washed from its mother’s arms as she struggled to escape the rising waters. Writing in 1864, the journalist Samuel Harrison gave Mr. Dawson’s own account of the event.

“We had all been in bed about half an hour, when my wife awoke me, and said, “What is that noise? What is that shouting?” My wife had been confined only the day before, and she was awake…My wife took the child up, and I wrapped them both in blankets, and carried them down stairs, and out of the house. Of course my wife had nothing on but her night dress, and the weather was dreadfully boisterous and cold. I had carried my wife and child about twenty yards from the door when the flood met us, and knocked us both down, when we were between Mr. Gill’s and Mr. R. Ibbotson’s. We were both covered by the water, and I was obliged to let my wife go. I did not see the water before it knocked us down. I managed to get up, and again seized hold of my wife and child. My wife said “Turn back again to the house.” I did so, and just as I got to the door the flood caught us again, and washed the blankets and my child away, and left my wife naked in my arms. I got my wife inside the house, and pushed her a little way up the stairs. I was obliged to leave the child to its fate, or I could not have saved my wife, for the flood was in the house. ..I opened the back chamber window, and tried to place a mattress across to connect the window with an embankment there is at the back of the house, whence we could get on to the hill side out of danger. The mattress was too short to reach across and it fell down. I then shouted out for help. My brother …brought a ladder, and laid it across from the window to the hillside. My wife was still undressed, but I put her out of the window, and she was carried across and taken to Mr. Joseph Ibbotson’s, where she was clothed, put to bed, and carefully attended to. The body of the child was found in the coal cellar a few days after.”
Samuel Harrison also described the extensive damage to property at Low Bradfield, where many farms and houses, as well as the school, mill, blacksmith’s shop and other buildings were destroyed. He said, “The destruction at lower Bradfield is so thorough that the rock is torn up from under the foundation of the buildings.”

References: ‘A Complete History of The Great Flood at Sheffield’ by Samuel Harrison, first published by S.Harrison 1864, reprinted in 1974 by Evans and Langley, with an introduction by Mary Walton; High and Low Bradfield Conservation Area Appraisal, Peak District National Park Authority, January 2010; A.H.Smith (1961) ‘The Place Names of the West Riding of Yorkshire’, Cambridge University Press.